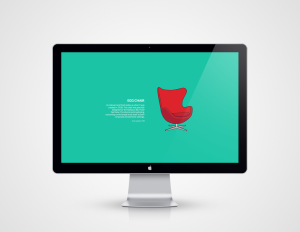 Iconic Furniture was conceived out of an in house side project at LLI Design. Starting initially as a bunch of mid century furniture sketches we were looking at ways to “frame” and present the sketches and get them off paper into a more permanent form.
To progress the initial sketches they were scanned and outlined in Adobe Illustrator, several graphic styles were explored, but we eventually settled on the one used as we felt it struck a good balance between accuracy and playfulness with a nod towards mid century advertising illustration.

After deciding that the project would be published as an interactive website we explored multiple ways to display the illustrations and text; settling on a strong graphic style utilising Lato font in various weights. The bold muted background colour palette was again inspired by period Mid century advertising and posters to complement the furniture.

Finally the parallax effect (vertical scrolling moving panels) was employed to add intrigue as each new illustration is revealed.

Iconic Furniture, was designed and developed in house by LLI Design – http://llidesign.co.uk